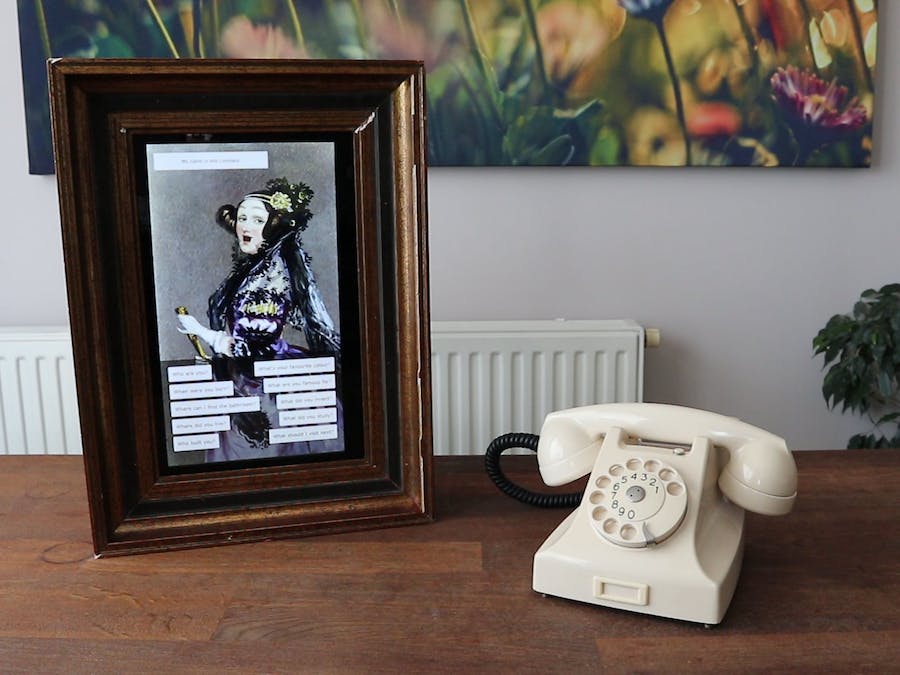 Have a chat with your favourite person from the past with the Historic Voicebot! With this interactive installation, you can talk to a historical figure through both chat and voice. Made using Dialogflow, Node.js, HTML Canvas, an AIY Voice Kit, a Raspberry Pi and a vintage phone.

A quick sketch of the concept:

The concept consists of two parts:

To bring the concept to life, I’ve outlined the following architecture:

The three main parts are:

Dialogflow To create the conversational agent in Dialogflow, I tried and tested a number of different approaches to get the most accurate and reliable answers possible. I also set out to automate as much of the dialog creation as possible.

I found that in this case the easiest and most reliable way of adding knowledge to a Dialogflow chatbot was by adding a CSV file with question and answer pairs.

For the Historic Voicebot, I’ve manually created 20 question & answer pairs and added these to Dialogflow. As you can see, Ada Lovelace’s answers are correct, timely and reliable.

You can find more information about Dialogflow right here.

Node.js Server As mentioned in the architecture, the Node.js server is the brains of the operation, providing the connection between Dialogflow and the different devices.

For the first versions, the server was running locally on my laptop. For the current version, the server is deployed on an EC2 Amazon Web Services server running Ubuntu.

There are some great tutorials on Node.js and running it on AWS.

Graphics The animations for the Historic Voicebot were created by cutting various elements, like the arms, eyebrows and chin, out of a painting of Ada Lovelace using Adobe Photoshop. Each of these elements were individually placed on the HTML Canvasfrontend. The TweenJSJavaScript library was used to move and animate these cut-outs based on the input from users and the responses from Dialogflow.

Frame To complete the picture, an old frame was cut to the size of the touchscreen. As always, measure twice, cut once.

Don’t forget to take a relaxing break every once in a while!

For the phone I tried to find one that was used during the Ada Lovelace era. Not only were phones invented long after she died, really old phones are hard to come by. Nevertheless, I was able to purchase an old Ericsson rotary phone produced in the 1960’s.

To create the working voicebot, I aimed to place the AIY kit inside the phone whilst reusing as many of the original features as possible.

I was able to reuse the speaker and the two bells inside the phone. The rotary disk was also kept intact, but is currently not functional. I updated the microphone that was inside the handle to a modern one, to be able to accurately capture the audio input. I replaced the old phone cord with a new one to be able to correctly wire the new microphone.

Does it actually work? Only one way to find out, let’s test it!

That’s it for the Historic Voicebot project, talk to you later!