Build a facial recognition camera that can detect if someone is smiling (or not) and their age using Wia, Amazon Rekognition & Raspberry Pi.

Build a facial recognition camera that can detect if someone is smiling (or not) and their age using Wia, Amazon Rekognition & Raspberry Pi.

Hi All, For this tutorial, we're going to build a facial recognition camera that can detect if someone is smiling (or not).

We've already got lots of in depth guides showing you how to setup your Raspberry Pi from scratch. You can view those here.

Once you've got everything up and going, it's time to start setting up the camera on your Raspberry Pi. When you are logged into your Raspberry Pi via SSH, run the command sudo raspi-config. Press the down arrow key until you reach 5 Interfacing Options and press Enter.

Make sure P1 Camera is selected and press Enter.

When asked Would you like the camera interface to be enabled?, select <Yes>.

To exit, press the down arrow key until you reach <Finish> and press Enter.

Run the following 5 commands one by one:

To check Node.js is installed correctly, run node -v. It should return v4.3.2.

Initialise the project by running npm init. Hit Enter at each of the prompts. Install the wia and raspicamlibraries by running each of these commands:

Now we're going to write the code that will capture a photo and send it to Wia.

Copy and paste the code from below, replacing your-device-secret-key with your device's secret key. If you haven't already set one up, you can do so in the Wia dashboard here.

Press CTRL+O (that's the letter o, not the number) to save the code, followed by CTRL+X to exit Nano. Back in your terminal, run the code by running the command node run-camera.js.

In the debugger in the Wia dashboard you should now see the Event appearing.

In the Wia dashboard, we're now going to build the Flow that will detect happy faces. In the left side menu, click on Flows, then create a Flow called 'Detect Happy Faces'.

Drag across an Event node from the Triggers section. Hover over the node and click the gear icon to open the settings. Enter photo as the Event Name and click Update. Now add the Devices you would like this trigger to apply to.

Drag across the Detect Faces node under Services and connect it to the Event node.

Drag across a Function node under Logic and connect it to the Detect Faces node.

Hover over the Run Function node and click on the gear icon to open the settings.

Copy and paste the following code block to detect smiles. Then click Update.

Drag over an Email node from under Actions and connect it to the Run Function node.

Hover over the Email node and click on the gear to open the settings.

Enter your To Address, Subject Line and in the Body, copy and paste Detected smile: ${input.body.isSmiling}. Click Update to save.

Now go back to your Raspberry Pi and run the command node run-camera.js again to see your Flow running. Check your email inbox for the message.

(Optional) Try out other facial features

There are lots of other attributes you can try out. Click here to see the whole list. 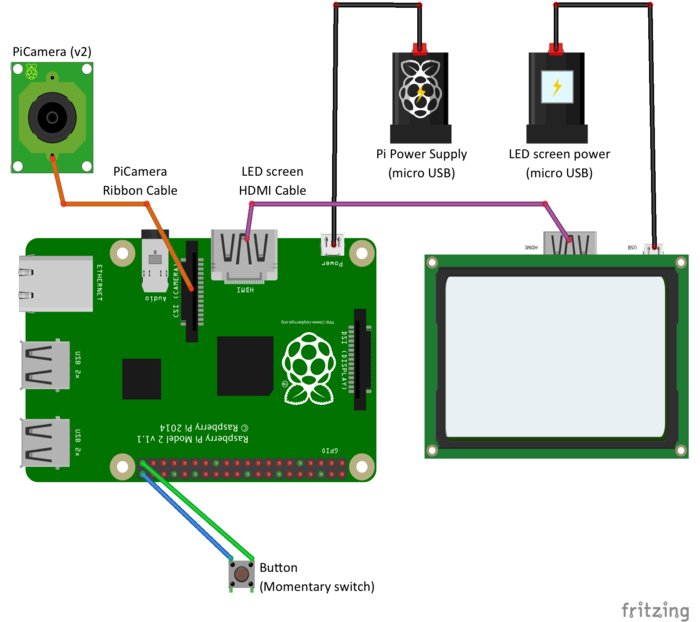