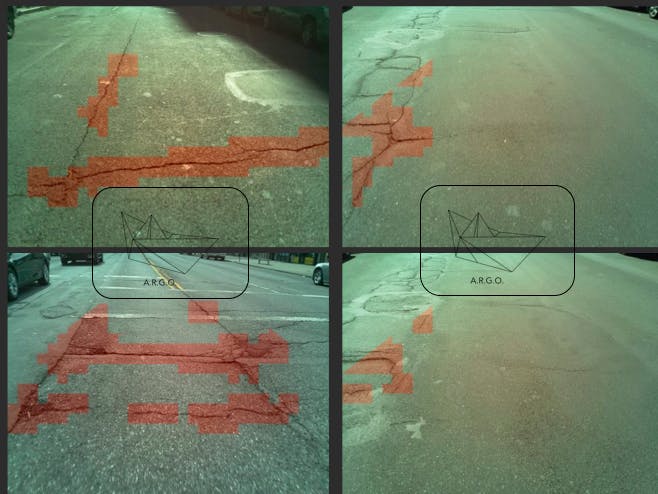 The maintenance of city streets is a most visible indicator of a city government's performance.

Every year, US cities spend $ Billions to maintain their local roads, that account for 77% of the nation's infrastructure.

New York City's Ten-Year Capital Strategy allocates $5.4 Billion for the rehabilitation of approximately 8,238 lane miles of its streets. This includes

What's missing is a low-cost method to collect continuous street quality data for ALL city streets in a consistent and methodical manner.

Our goal is to help cities and public works managers answer a simple question:

How quickly are each of my city's streets deteriorating?

As cities witness the rise of mobility options in the form of scooters, e-bikes and autonomous vehicles, they need digital tools to ensure that streets, bike lanes and assets are accounted for and maintained at cost.

To this end, we develop SQUID, a low cost data platform that integrates open source technologies to combine street imagery and ride quality data to provide a visual ground truth for all the city's streets.

SQUID was a  recipient of the 2016 Prototyping fund from the Knight Foundation.

SQUID started out as a hardware device, a $30 Raspberry Pi micro-computer fitted with accelerometer and GPS sensors, naive optimism and a persistence to prove the initial hypothesis. After collecting our first dataset on the streets of New York, we set out to polish our "lump of clay".

We currently use OpenStreetCam as the primary method to collect street imagery and ride quality data. This approach allows cities and municipalities simply download an app and start collecting data.

We worked with City of New York's Office of Operations and their SCOUT Team to collect 400+ miles of data from a single vehicle in just over 1 week!

Imagine, if just 15 vehicles vehicles were used to collect street imagery and ride quality data, we could achieve a complete and up-to-date street condition surveys across the entire city in mere weeks!

Pilot with the NYC's SCOUT Team ;

The City of Syracuse, NY invites us to prototype with their Public Works Department.

Between April 14 - 28, 2016, we collected an estimated 500 miles of street imagery (over 110,000 images) in just 10 days using a single vehicle with little manual intervention, demonstrating the scalability of this approach to inspect an entire city's street infrastructure.

We are currently building towards a Computer Vision approach to partially automate the detection of street defects such as cracks and large potholes and street assets.

Preliminary results of our Computer Vision detecting cracks on streets!

We welcome feedback, ideas and support on how  SQUID can be used to empower cities be proactive, open, and transparent around their public works.