Order Coffee with your voice!

Order Coffee with your voice! 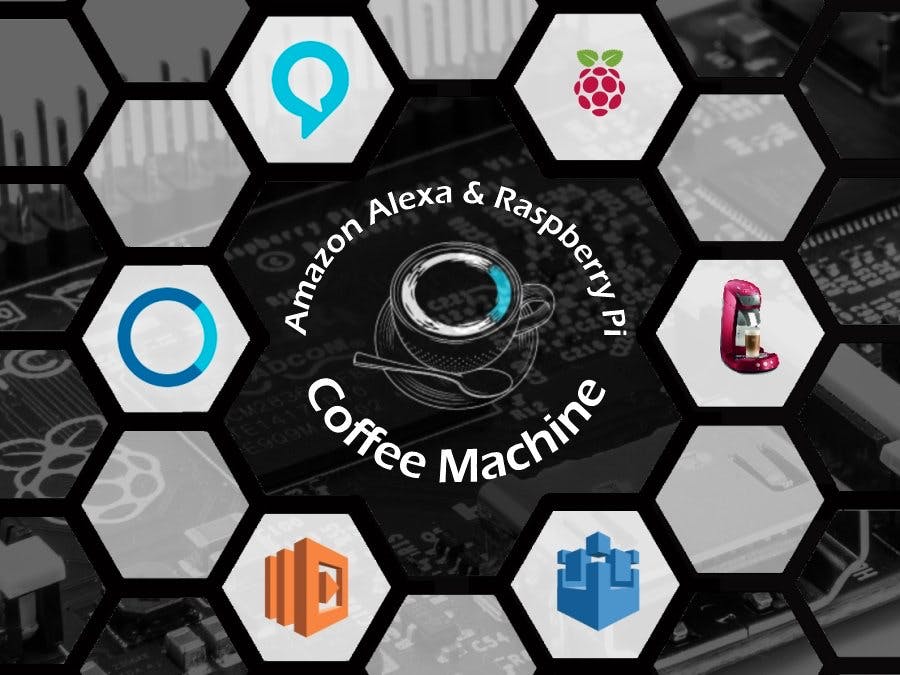 Ever asked Alexa to make you coffee? I did, and got a negative answer…

As my coffee machine broke down this summer and we bought a new one, it was safe for me to start tinkering with it and potentially freaking the machine up, without losing the so important cups of coffee a day.

The machine I have, can make you four types of coffee: regular, cappuccino, macchiato and latte. It has a water and milk reservoir, and you put in coffee pads. It looked easy enough to control, but still not as simple as just a switching relay for power.

This is the plan:

Got it? Ok, here is how the Coffee Machine works:

A Coffee Machine works on 230V and boils water (for coffee this is around 90 °C). If you are not careful, this can be very dangerous. Always unplug the machine and wait some time to let it cool down before opening it!

Before you can start building, you will have to visit your favorite electronica store. And a supermarket for some coffee and milk.

For the Alexa Voice Service part:

For the Coffee Machine part:

Here the fun starts, breaking open the Coffee Machine! Really, these guys at Philips know how to put a machine together, that you will not get apart afterwards (without reading the service manual first). I needed to use a drill to get the base loose of the machine part. But the result is OK; I found 3 PCBs where I have to make my connections!

The machine offers four choices of coffee, the regular coffee has three strengths, and you can select the number of cups.

The UI of the coffee machine

Starting with the lid; Both the Choice and Strength have their own set of LEDs and for both there is a button in the lid with an UP and DOWN side. On the inside, you can see the LEDs and buttons, and at the back I soldered my wires to the PCB:

For this project I’ve ignored the 2 LEDs and button in the middle, these are for cleaning processes.

For the base the same principle is used: there are 3 buttons with corresponding LEDs. Middle one is On/Off, left is One cup, right is Two cups.

On the inside, again at the front of the PCB are the buttons and the LEDs, and on the backside the soldered wires:

And one more PCB, this time for the 3 sensors: Lid open/close (switch), Milk reservoir (HAL sensor) and Water level (HAL sensor). From this PCB, I also take the 5V and GROUND connections.

Yellow for the sensors, Green and White for 5V and GND

Learning moment: As I’m working with Optocouplers, I can only measure ON/OFF, not an analog signal. So after spending some hours on troubleshooting and using various resisters (and blowing up an optocoupler), I’ve only focused on connecting the Lid sensor for this project.

I mentioned my machine was broken, the water level sensor turned out to be the issue (HAL sensor was not activated anymore by the magnet inside the Water reservoir). As I now have the sensor wire which is at 2.5V for 1 cup and 3.5V for 2 cups, I connected it to 5V to let it think there is always plenty of water.

For the base the same was done, connecting both the base and the sensors.

A funky IDE cable from my old PC is used to get all wires down to the breadboard.

Learning moment: Using an IDE cable to connect to Coffee Machine to the breadboard, sounded very easy. An IDE cable is, like a GPIO cable, a 40 wire ribbon. So I took a cobbler and go, right? Nope… the IDE has interconnected GND wires on other places then the GPIO header has. So I had to match these away. Then there is a twist in the cable that also takes away some connections. And did I mention that they have 1 pin less in the center of the connector? But I managed to get in all 10 LEDs, 7 buttons, 3 sensors, 5V and GND. When I’m soldering all this together on a perma-board later on, I’ll use a Breakout Helper, that saves me the GPIO GND interconnections.

There are many good explanations on the internet, and to give credits to where they belong to, I used this video to get myself informed: "Using Optocouplers with the Raspberry Pi" by Gaven MacDonald

In short, refer to image:

The concept behind “listening” to the LED

The concept behind “pressing” the Buttons

On the breadboard you can very clearly see where both circuits are split:

Upper half is the Coffee Machine, lower half the Raspberry. White ICs in the middle are the Optocouplers

For Alexa Pi, I need 1 momentary switch (or button), 3 LEDs.

The button is to activate the microphone. The red LED to show that the microphone is recording. The blue LED is showing that the recording is uploaded to Alexa and that we are waiting for a response. When the received audio is played back, the green LED shows.

Once the project reached final stage, I did move these from the breadboard into the Raspberry Pi case.

For some more safety, I've put the breadboards inside a box. Coffee is made with water, and water + electricity doesn't play very well together...

Box to keep the breadboards safe from water

This is the complete end result:

The Coffee Machine as setup in my kitchen

First let’s look at the concept of all interactions (also see the attached schematic):

VUI between all Amazon services, the Raspberry Pi and my Coffee Machine

Reading from left to right:

Raspberry Pi has a speaker, microphone, a button and some LEDs. This is to meet the requirements for using Alexa Voice Services (voice activation is only allowed on the Echo, so I need to use a button). As python program to handle this, I used the AlexaPi implementation.

AVS does a Speech to Text and does push that into an Amazon Alexa Skills Kit.

ASK does recognize the commands and pushes that to AWS Lambda, based on Intents setup I did on ASK.

AWS Lambda is a programming platform where I’ve setup a python script to process the intents received. It does read the AWS IoT data from my Thing, and also uploads new data to my Thing. AWS IoT is the data broker that sends out “Delta” messages to subscribers.

For communicating with the AWS IoT, I used the python libraries Amazon provides on Github on both the Raspberry Pi and AWS Lambda. Reason I used the library on the Lambda implementation for consistency, and because I didn’t get boto3 to work.

That means that there are 3 programs involved:

To get these all working, I did read lots of forums and tried many examples, but this really took me some time to get it working.

To help you not fall off the same obstacles, here are my learning moments:

We start with setting up the Amazon part that does exist of several services that talk to each other, and here you generate logins and certificates you will need later on. You will need an account for Amazon Developer Services and Amazon Web Services.

Go to the Alexa Voice Service website and create yourself a setup like this. The information from the Security Profile is needed in your Alexa Pi setup.

1 / 4 • The basic setup of you Alexa Voice Service

Go to the AWS IoT website and create 3 resources: a Thing, a Policy and a Certificate. This certificate is needed for the Lambda setup and your Raspberry setup.

Go to the AWS Lambda website and create yourself a function. Insert the certificates in the zip-file and change the **** entries in the python file to reflect your certificates and ARN.

Go to the Alexa Skills Kit website and create your Skill with Interaction Intents, Slot Types and Sample Utterances.

I do assume that you have a working Raspberry Pi, including GPIO library and Python. For the development environment, I do use the Adafruit WebIDE, also easy if you are not sure about your libraries, they install all you need. You don't need SPI, it might even be better to disable as we are using all GPIO pins available.

Some basics setup you want to do on your Raspberry Pi, Update the Raspberry Pi to the latest and greatest

In my project, I do not register the scripts to run automatically, you will have to manually start both (that makes it easier to stop script, adjust code, start script).

As their implementation used functionality to listen to keywords (not allowed for an Alexa AVS implementation) and included online radio functionality, I’ve cut out part of their functionality, getting back to the core. Also I made some enhancements for Voice Activation Detection to detect when I’m actually speaking/responding to Alexa.

This modified version is attached to this project.

To enable Alexa Pi, install the libraries and run the setup, last step is to open a browser and complete the creation of the Alexa token:

Learning moment: On the Raspberry Pi, the audio does by default NOT go through the 3.5mm jack, but uses AUTO or HDMI, leaving me in an empty silence. So make sure the 3.5mm jack is the default:

In the code, make adjustments to which GPIO pin is used for your button and LEDs. Credentials for Alexa are taken from the creds.py file that was generated in the setup. Once all is installed, start AlexaPi.py. Alexa is now waiting for your voice input!

Then also on the Raspberry Pi, setup the script for the Coffee Machine.

Upload your files, don't forget to include your 2 AWS IoT certificates!

In the code, make adjustments to include your Certificates and the IoT shadow to poll.

Once all is installed, start CoffeeMachine.py. The program will start polling AWS IoT for commands.

Now I'm ready to ask my Coffee Machine to make me something!

You should have already started the two Python scripts on your Raspberry Pi, so go ahead ask Alexa to make you coffee.

If you wish to control my Coffee Machine, this is the Alexa Skill!

[Edit 2016-09-09] During the certification process I got some questions back and made some changes to improve my skill. As these were important learning moments for me, I want to share them with you:

The skill can now also take your order from the first command line:

My skill tended to error out when you did run too many actions in a short timeframe. Remember my comment about different AWSIoTMQTTShadowClient IDs? They were not yet different enough... I've now implemented an even more unique method by including the last digits of the Alexa Request ID into the Lambda ID. Now several users can work at the same time, and do lots of orders within the 5 second timeout :)