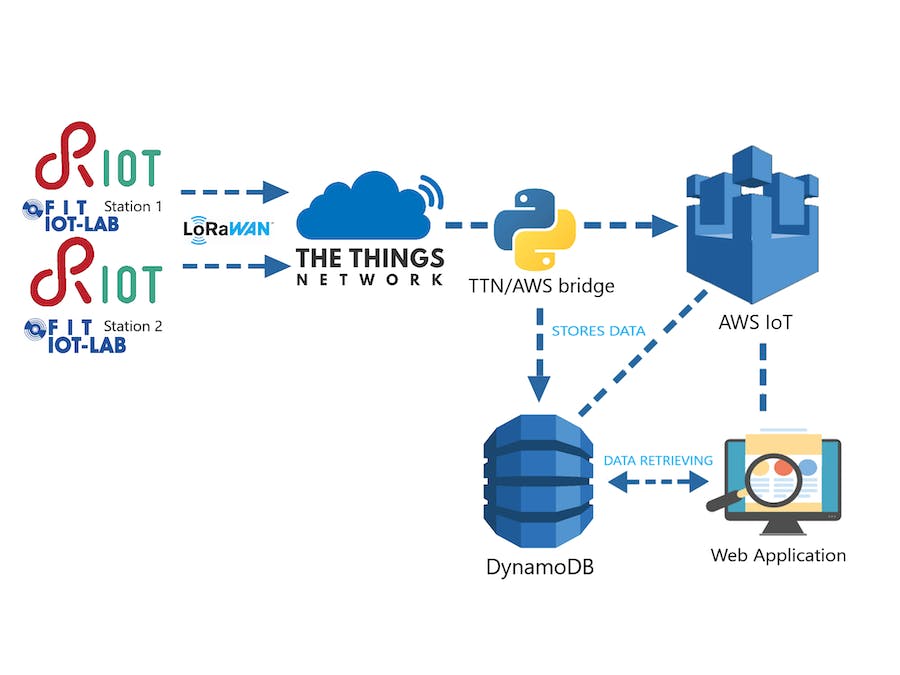 This project is the third part of an assignment for the course of Internet of Things at the Sapienza University of Rome. The aim is to build a Virtual Environmental Station based on Amazon Web Services (AWS). It is suggested to inspect the first part and the second part because in this guide it will be assumed that you already know the basics of the argument.

The system is made by two RIOT-OS native boards that generate random environmental data and send them firstly to The Things Network through LoRaWAN, then these data will be sent to AWS with a bridge.

What is IoT-LAB?IoT-LAB provides a very large scale infrastructure suitable for testing small wireless sensor devices and heterogeneous communicating objects. It is the evolution and extension of the SENSLAB testbed (2010-2013).

The first step is to create your account and configure your SSH access.Simply follow the linked guides, because they are very detailed and clear; take your time to set everything.

A view of the SSH key section

Keep in mind that in this article, we refer to the LoRaWAN communication using RIOT and TheThingsNetwork guide provided by IoT-Lab itself

The Things Network is a contributor member of the LoRa Alliance.Again, you have to do some preparation steps, starting obviously from creating your account. Then, you need to create an application and register two devices. Like before, the linked guides are very clear and easy to use.

For a better visualization of the data incoming, in the decoder in the section Payload Formats of your application, copy this javascript code:

Even if the guide mentioned before is clear in how to run the two RIOT boards, we will see these steps together. Notice that it is important that you followed the other steps that you have seen in the IoT-LAB setup and The Things Network setup sections. Also, remember that you can find the code used in this repository.

In <exp-id> section you have to insert the id of your experiment.

Now pay attention! You have to substitute the basic main.c located at RIOT/tests/pkg_semtech-loramac with the main.c that you can find in my repository. You may have to use the Secure Copy (scp).

Notice that you have to check your version, in my case I had to change it.

In the <device_number> section insert obviously the number of your device.

Again, change the <device_number> section. Run the devices in different terminals, repeating the steps needed for the setup.

For further information about loramac commands, you can type help.

where <station_id> is supposed to be station1 or station2.

Again, remember to run the two stations in two different terminals. In the second terminal, you have to connect again to the Saclay site and continue from the step iotlab-node --update [...].

A clarification: the file main.c is based on the semtech_loramac test available in the official RIOT folder. I modified it for our purposes, adding the function cmd_start. The comments in whole the code will help you to better understand what is by default and what not.

Like in the second part of the project, we need a bridge that sends the data to AWS, this time getting them from The Things Network. As in the previous part, the localhost web page will display these data. Now give a look to the code, that resumes the same structure of the bridge presented in the second part, and remember that you will have to set your personal parameters!

Here we have some basic settings and the function to establish a connection with AWS, that you may remember from the previous parts.

Finally, we have the callbacks for decoding and publishing the messages. You can run the bridge, after modifying it with your parameters, opening a terminal and launching:

You have to get 0 as the return value of the connection.

The code is available in my Github repository and obviously if you want to use it you have to change some parameters like the endpoint and the path of the certificates. If everything has been done correctly, you can run the system in the following way:

If everything worked properly, you should see something like this!