Python and Paho for MQTT with AWS IoT

Python and Paho for MQTT with AWS IoT 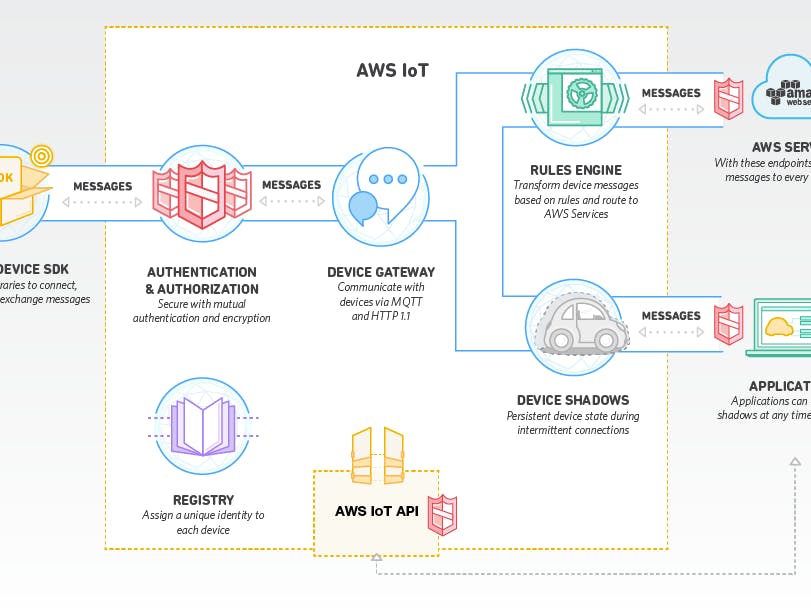 I've put together a couple of Python programs to use MQTT with AWS IoT.

Setup the working folder with programs and policy file

Download my programs from github as usual (using git) and go to the expanded folder:

In order to use/test my sample Python programs you have to first create your account on Amazon AWS .

Once logged on your AWS account you can download and setup the AWS CLI (the command line interface) with which you will be able to create your test "thing" and some certificates that will allow the encrypted connection with AWS IoT gateway.

Please find below the steps to create a thing, some certificates and link the certificates with the thing. I've slightly edited and annotated the basic instructions found on AWS here  .

Create one thing in aws IoT:

Download root certificate from this URL using your browser and save it with filename: aws-iot-rootCA.crt

Create a policy from the json file you got cloning the repository with git in first step:

Paste your certificate-arn inside the following command before entering it:

Configuration of your endpoint:

At this point my sample python programs ( awsiotpub.py and awsiotsub.py ) should run correctly but the AWS documentation specifies to also enter the following to attach the certificate to the thing:

How to Test the Sample Python Programs

Open two console windows and enter in the first awsiotsub.py and in the second awsiotpub.py

The second one will start sending random temperature values to the AWS IoT hub:

The first one will display them when received from the IoT hub:

You can check the sources and modify the topics used by both programs to better fit your needs. Currently, awsiotsub.py subscribes to any topic and will show all of the received msgs.

Enjoy MQTT and AWS IoT in your Python programs!

All feedbacks are welcome.