Home Assistant is an automation platform that can track and control all kinds of devices and automate actions, which fits well with AWS IoT.

Home Assistant is an automation platform that can track and control all kinds of devices and automate actions, which fits well with AWS IoT. 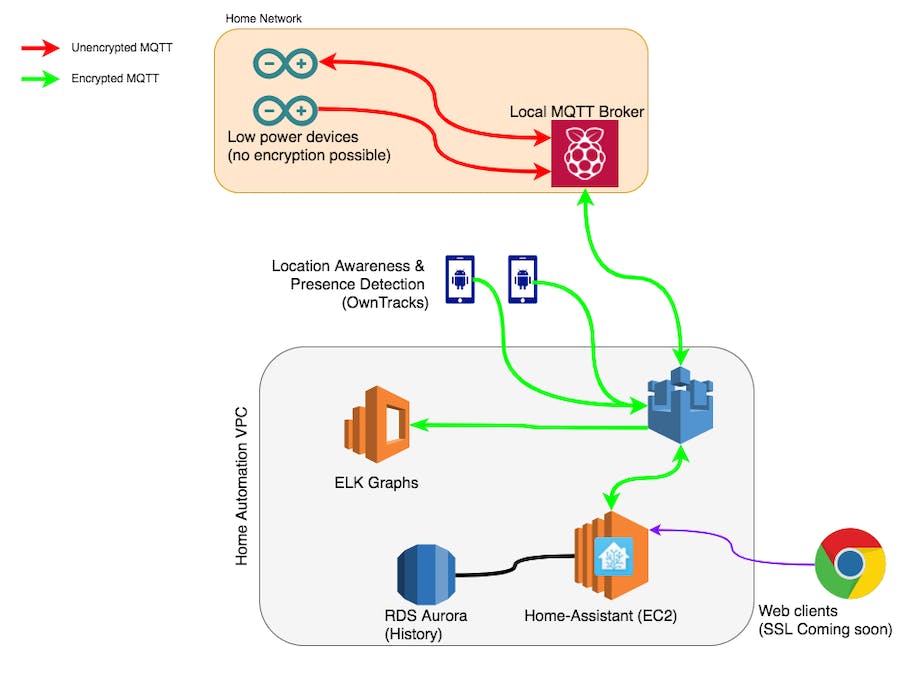 This project provides integration between Home Assistant, AWS IoT, and low power devices running on the ESP8266. The ESP8266 has many firmwares, which provide additional functionality for devices like the Sonoff or MagicHouse LED Controllers. Most of these firmwares, however, don’t provide the ability to speak encrypted MQTT with client certificates, which is required by AWS for security.

During the contest, Jan Metzner from AWS made me aware of the MongooseOS Project, which can handle certificates. Using firmwares like this would let you use encrypted MQTT; however, I haven’t found a single firmware like Tasmota or Espurna, which allows for this out of the box.

This project describes a central component which glues together many of my various home automation components. These components are detailed on separate pages:

The easiest, secure option is to use the WiFi encryption in the local network, and speak locally to a gateway via unencrypted MQTT, and then on a beefier raspberry pi send the communication to AWS for processing.

Future additions will integrate AWS GreenGrass to allow some logic to be handled on the raspberry pi locally itself, in case the internet is not working. As it is now, I am completely dependent on the cloud, and if my internet connection fails then everything at home stops working. An example of the current logic is as follows:

The rest of this post will describe how I setup AWS and the Mosquitto gateway locally. My goal is to learn AWS, as well as have a single central location for all my home automation logic.

Setting up the Pi Gateway

Install Raspbian or your favourite Raspberry Pi Linux. Note: if you’re using Raspbian, the version of Mosquitto (1.3), which comes with it by default, does not work. You will need to install 1.4 from mosquitto.org. You can install this with the following commands:

To configure Mosquitto to connect to AWS IoT, you will need to add the following to /etc/mosquitto/mosquitto.conf:

You can find the MQTT Bridge hostname under IOT -> Settings -> Custom Endpoint:

The keys and certificates are provisioned from the AWS IoT page. I defined a policy that allows the bridge to do anything; you may consider reducing the policy to only allow publishing to a certain branch, but to keep things simple I allow my gateway to do anything on MQTT:

The policytext is as follows

Setting up the EC2 Instance for Home Assistant

Home Assistant will run in EC2. I provisioned a micro EC2 instance. Once it was booted, I installed the requirements for Home Assistant:

You can find the Home Assistant configuration under /home/ec2-user/.homeassistant/configuration.yaml

To set up Home Assistant to connect to the AWS IOT Gateway, add something like this:

AWS RDS proved very expensive (you can run mysql in the same EC2 instance as Home Assistant to save a bit on your AWS bill). If you’re using RDS, which I initially setup, you can add the following to the configuration.yaml to connect to the RDS instance:

As an alternative to RDS, you can simply install MySQL/MariaDB or a database of your choosing on the EC2 system where Home Assistant is running.

At this point, the Raspberry Pi in my local network is setup and connected to AWS IOT Gateway, and Home Assistant is running in EC2 and also connected here to perform actions. I initially thought that delays in the network would slow down the automation actions; however, I haven’t noticed a difference between the on-site Home Assistant and the one running in AWS.

My next steps will be to try to implement GreenGrass, so in case my internet connection at home fails, I still have some basic automation functionality and caching for when the clouds return.