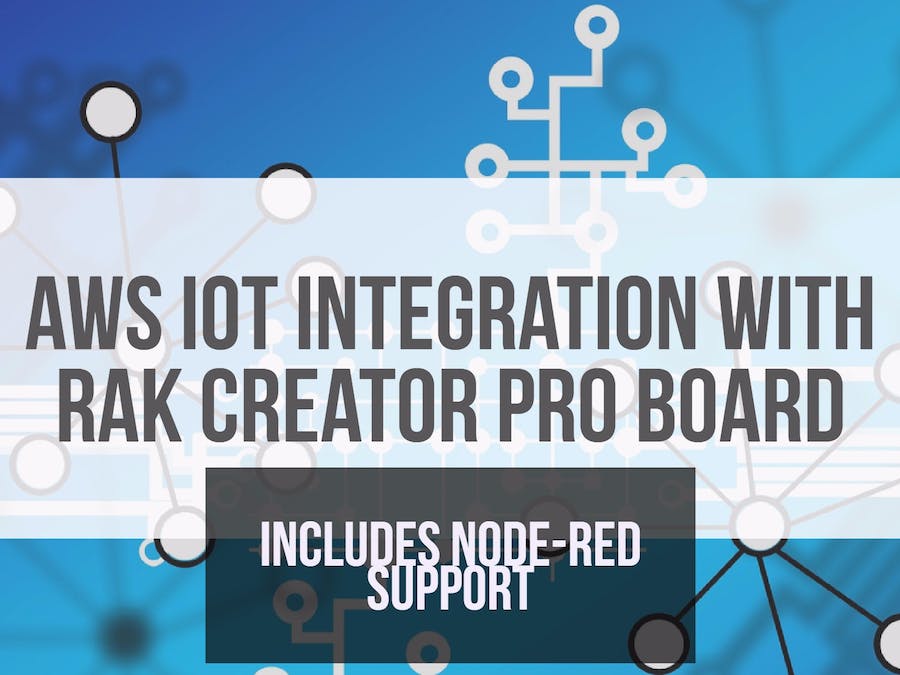 This project is part one of a series of tutorial showcasing the integration of RAK wireless wifi products with AWS Services. In futureparts we will discuss more in depth about AWS IoT Services and the Shadow APIs. We will delve into integrating these services with analytics software as well.

This project requires any of the RAK473 based devices like the Creator pro or the Dash button.

We will be using the arduino IDE to set up our board. Please do follow the tutorial here to get your IDE setup:

Once this is done we are good to go. Lets see what is the AWS IoT services and a little bit about how they work

AWS IoT provides secure, bi-directional communication between Internet-connected things (devices such as sensors, actuators, embedded micro-controllers, or smart appliances) and the AWS cloud. This enables you to collect telemetry data from multiple things, and store and analyze the data. You can also create applications that enable your users to control these devices from their phones or tablets.

Enables devices to securely and efficiently communicate with AWS IoT.

Provides message processing and integration with other AWS services. You can use an SQL-based language to select data from message payloads, process and send the data to other services, such as Amazon S3, Amazon DynamoDB, and AWS Lambda. You can also use the message broker to republish messages to other subscribers.

Provides shared responsibility for security in the AWS cloud. Your things must keep their credentials safe in order to securely send data to the message broker. The message broker and rules engine use AWS security features to send data securely to devices or other AWS services.

Sometimes referred to as a device shadow. A JSON document used to store and retrieve current state information for a thing (device, app, and so on).

Provides persistent representations of your things in the AWS cloud. You can publish updated state information to a thing shadow, and your thing can synchronize its state when it connects. Your things can also publish their current state to a thing shadow for use by applications or devices.

AWS IoT provides the following interfaces to create and interact with your things:

Each device connecting to the AWS IoT services is represented by a AWS IoT Thing. The Thing is stored as part of the Things Registry in your account. The Thing can connect with the AWS IoT MQTT broker assigned to the region in which your account exists and all the communication is over MQTT-over-TLS with certificates as the manner of authentication.

Each thing has some attributes that can be associated to it. Attributes are nothing but properties of a thing that define its state. Like its sensor reading, battery status, connectivity status etc.

Once the Thing connects to the MQTT broker, it is free to send messages to the AWS IoT services to any topic of its choice. However, if the developer wishes, they can also send to a special service API in AWS IoT called Shadow services. Shadow services is a virtual shadow of your device on the cloud. It stores the state of you devices as last seen by the AWS IoT platform and this is the virtual devices that any external 3rd party apps that want the read the attributes of a device would hit.

The physical Thing connects to the AWS IoT services over MQTT over TLS. Hence we choose RAK 473 based products as they can handle this with much ease.

There are certain topics that you can send your data or send requests to get response via MQTT:

We will concern ourselves with the Update service and update/accepted service for now:

Publish a request state document to this topic to update the thing shadow:

A client attempting to update the state of a thing would send a JSON request state document like this:

A thing updating its thing shadow would send a JSON request state document like this:

AWS IoT responds by publishing to either /update/accepted or /update/rejected.

AWS IoT publishes a response state document to this topic when it accepts a change for the thing shadow:

The following is an example of the required policy:

The Thing Shadows services acts as an intermediary, allowing devices and applications to retrieve and update thing shadows.

The Thing Shadows service uses MQTT topics to facilitate communication between applications and devices. To see how this works, use the AWS IoT MQTT client to subscribe to the following MQTT topics with QoS 1:

The Thing Shadows service sends messages to this topic when an update is successfully made to the thing shadow.

The Thing Shadows service sends messages to this topic when an update to the thing shadow is rejected.

The Thing Shadows service sends messages to this topic when a difference is detected between the reported and desired sections of the thing shadow. For more information, see /update/delta.

The Thing Shadows service sends messages to this topic when a request for the thing shadow is made successfully.

The Thing Shadows service sends messages to this topic when a request for the thing shadow is rejected.

The Thing Shadows service sends messages to this topic when the thing shadow is deleted.

The Thing Shadows service sends messages to this topic when a request to delete the thing shadow is rejected.

The Thing Shadows service publishes a state document to this topic whenever an update to the thing shadow is successfully performed.

Now that we have a basic idea about AWS IoT services lets get more practical and start integration our board with AWS.

It is required that you have a working AWS account with you. If you dont have one kindly proceed to create your AWS account here:

1) Once your AWS account is setup proceed to the AWS IoT service as shown:

5) Once a name is given the thing is ready to get some messages from the real world devices.

6) Now let’s set some attributes for this device. Each device can have a set of attributes that it can update by sending MQTT requests to the AWS IoT services. They can be things like led status, sensor readings etc.

7) Click on the Thing you just created and this will take you to a Things config screen like so:

9) Now provide some attributes to this device. In this sample we will provide the led attribute with a value of 1 or 0 stating on or off.

11) Now lets create the certificates and policies for this device. Go to the AWS IoT dash board and on the left pane click Secure -> Certificates

a. Your private certificate

b. Your public client certificate

d. And the root CA for AWS IoT

14) Here I would generally prefer the advanced mode where you can specify the policy json directly. Enter the following JSON

17) Now its time to associate the policy and thing to the certificate:

19) In the three dots menu on the certificate card menu, click attach thing and select you TestDevice entry in the dialog that comes up

21) Now finally activate this certificate by clicking on the Activate menu in the certificate card, just like shown above. Once activated, we can start writing the firmware for the Ameba devices.

This marks the end of the setup of you AWS thing. Now your creator pro has a virtual devices in the coud that is managed by AWS IoT services. Lets see how you can interact with this virtual device state with your Creator pro.

In this sample project we have just done a few Subscribe topics to the various AWS IoT shadow topics and then publish a desired state of the Led to 1 once we connect successfully to the AWS IoT services.

Here are the edits to this program:

Application on Ameba First fill in the network ssid and password for connection.

Then fill in the "thing" name "ameba". The name is the name you gave for your device on the AWS Things config page.

And the MQTT Broker server address we found earlier in AWS IoT: "xxxx.iot.ap-southeast-1.amazonaws.com". This will change for each of the user as they may have a different region of AWS IoT. Please consult the AWS IoT Things page of your device to know the endpoint address. This will be available in the Interact Menu of you AWS Things config screen.

Next, the root CA used in TLS can be found in AWS IoT services documentation page as shown below:

Download and make sure the downloaded root CA content conforms to the root CA we used in sketch.

And adjust the format of private key in the same way:

Then the modification of sample code is done.

Compile and upload the sample code to Ameba and press the reset button, open the serial monitor:

From the log, you can see Ameba does the following action,

If you get rc=-4. This means the connection is mostly timing out. try to set these two values in your code with a higher value by specifying them in a #define block

As a bonus, lets see how you can get the AWS IoT service integrated with Node-red to run your own workflows when a news message arrives in the AWS IoT things topic

I have this presented in a separate article here:

2) search for 'aws-iot' and you will find the following nodes:

3) install the plugin shown above:

Once installed the nodes will show up like so

Lets go ahead and add a input Aws mqtt node like so:

MQTT input node. Connects to a broker and subscribes to the specified topic. The topic may contain MQTT wildcards.

msg.payload is usually a string, but can also be a binary buffer.

Remember we had downloaded the certificates from AWS when creating the TLS certificates for our Thing. Lets copy those files to a location say /root/.awscerts

Once the files are copied, you need to rename them to match the format needed by the AWS IoT Node Red node. The node expects the files to be named as follows:

Where YourUniqueClientIdentifier is the AWS thing name what you put when creating your thing. You can refer to the other tab that you have open.

Now you will return to the previous menu. Here you need to listen to a particular Shadow service MQTT topic called update/accepted.

Now Your node should show connected and start getting messages. Now try tp send an update to the update topic as we had programmed in the RAK473 board. A consequent /update/accepted will shows up in node red and you can now parse the mqtt json data and trigger further jobs. For example, here we try to parse the incoming data and send it to twitter

We can also send the data to an influx db backend for storage and analysis:

I will attach this flow in the code section of this tutorial .