This tutorial takes you through the intricacies of integrating the RAK473 based board with AWS IoT Shadow services and to react to updates.

This tutorial takes you through the intricacies of integrating the RAK473 based board with AWS IoT Shadow services and to react to updates. 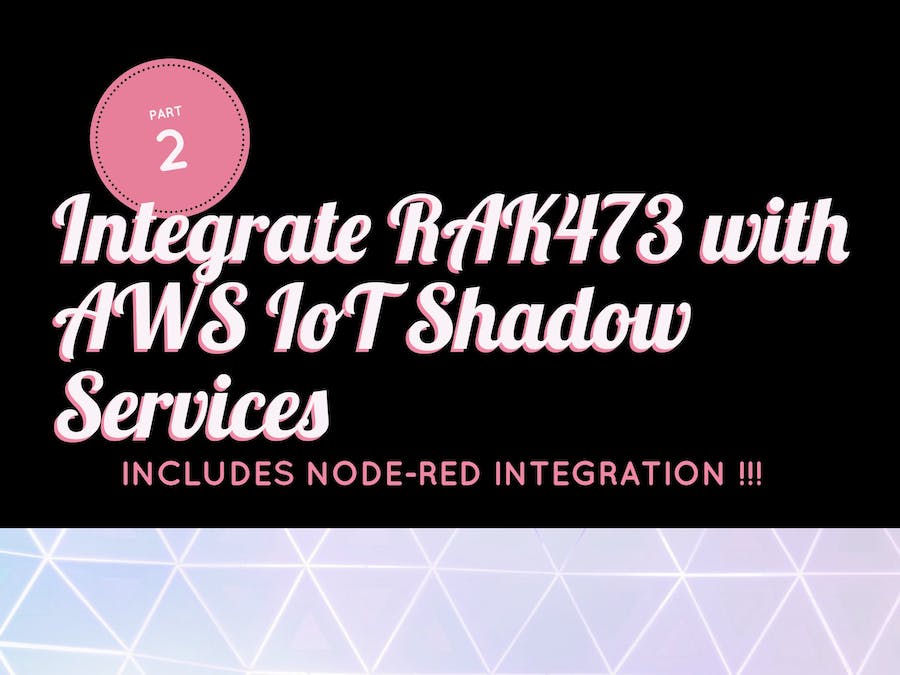 This tutorial is part two of the AWS IoT series for integrating RAK473 based board from RAK Wireless with the various cloud IoT services provided by Amazon web services.

We will be focussing on the RAK473 based board, namely the Creator pro ans Dash button. These boards are based on the Realtek RTL8711AM chipset and are quite powerful chipsets providing additional features like TLS support, mDNS API support and much more over the standard 802.11 features.

For setting up the Arduino IDE for the RAK 473 based boards please visit the URL here: https://github.com/RAKWireless/CREATOR-Arduino-SDK

I have also covered the details in the post here: https://www.hackster.io/naresh-krish/diy-remote-wifi-switch-using-the-rak-dashbutton-09b0de

Once these two are setup. We can proceed further.

In our previous tutorial, we touched up the concept of the AWS IoT services and how Things can be made to have a virtual presence called Shadow in the cloud.

The purpose of having a device shadow is simple. IoT devices are not meant to be always on devices. They may switch on for short bursts of time to relay information. Even if they are always-on it is not necessary for them to be always connected. Network disturbances, disconnects may result in devices loosing connectivity with the radio communication and drop data packets or even fail to send data packets from their side of operations.

During such scenarios, your apps (web application, mobile application) shouldn't try to access the things devices directly to make changes to their configuration (push data) or gather sensor data (pull data). The Shadow service is a perfect solution to this problem. The device Shadow is a virtual representation of the most recent stare of the Thing which it represents. It can have attributes and fields that map to certain measurements/configuration on the device that can be updated/read by our application without actually failing with a connection failure.

Since the AWS IoT shadows are always on virtual entities, you can be gauranteed that when you read the Shadow for attributes and confiuguration, you will ALWAYS get the most recent update.

Note: Although the update may not be the most recent w.r.t to the device as issues like network disconnects discussed above may have hampered the device from sending an update.

The AWS Shadow services provide endpoints for both devices as well as apps to read//write attribute for a Thing on the AWS IoT service.

The Thing Shadows service uses reserved MQTT topics to enable applications and things to get, update, or delete the state information for a thing (thing shadow). The names of these topics start with $aws/things/thingName/shadow. Publishing and subscribing on thing shadow topics requires topic-based authorization. AWS IoT reserves the right to add new topics to the existing topic structure. For this reason, we recommend that you avoid wild card subscriptions to shadow topics. For example, avoid subscribing to topic filters like $aws/things/thingName/shadow/# because the number of topics that match this topic filter might increase as AWS IoT introduces new shadow topics. For examples of the messages published on these topics see Thing Shadows Data Flow.

The following are the MQTT topics used for interacting with thing shadows.

The endpoint is specific to your AWS account. To retrieve your endpoint, use the describe-endpoint command. The format of the endpoint is as follows:

Each link above in turn links to the API documentation on AWS so feel free to research into the topic/endpoints for more information.

The MQTT endpoints a are for devices to update their attributes and to subscribe to secondary enents like update success, update rejected etc. These are essential to take remedy action when a Shadow operation fails.

The HTTPs REST endpoints are for apps (web services, mobile apps) to read/write to the Things Shadow instance in the cloud.

Updating a thing shadow requires a policy that allows the caller to perform the iot:UpdateThingShadow action. The Thing Shadows service accepts two forms of authentication: Signature Version 4 with IAM credentials or TLS mutual authentication with a client certificate.

The following is an example policy that allows a caller to update a thing shadow:

Sign in to the AWS Management Console and open the AWS IoT console at https://aws.amazon.com/iot. On the Welcome page, choose Get started.

If this is your first time using the AWS IoT console, you see the Welcome to the AWS IoT Console page. In the left navigation pane, choose Manage to expand the choices, and then choose Things.

On the page that says You don't have any things yet, choose Register a thing. (If you have created a thing before, choose Create.)

Choose Activate to activate the X.509 certificate, then choose Attach a policy.

Now connect the policy that you will generate below to this certificate. and your done.

The Amazon ROOT CA is available in this page:

AWS IoT policies are JSON documents. They are very similar to IAM policies in structure but have some spcialised sections for resources to be assocuated with proper resource access/ permission etc. AWS IoT supports named policies so many identities can reference the same policy document. Named policies are versioned so they can be easily rolled back.

AWS IoT defines a set of policy actions that describe the operations and resources to which you can grant or deny access. For example:

An AWS IoT policy is a JSON document that contains one or more policy statements. Each statement contains an Effect , an Action , and a Resource . The Effect specifies whether the action will be allowed or denied. The Action specifies the action the policy is allowing or denying. The Resource specifies the resource or resources on which the action is allowed or denied. The following policy grants all devices permission to connect to the AWS IoT message broker, but restricts the device to publishing on a specific MQTT topic:

Ok now that we have some in depth knowledge with the AWS shadow services, lets see what our RAK473 code can do to connect to the AWS IoT account and updatee its shadow via MQTT:

Lets go through the details of the code:

This part includes the AMEba wifi and MQTT pubsub library for usage.

Here we can edit the variables to store our wifi SSID and password for connecting to later.

Note: The Ameba SDK also supports the simple config protocol to update its SSID and password OTA directly via a supported app on mobile or desktop: more information here: https://www.amebaiot.com/en/standard-sdk-simple-config/

This defines the name of the Thing which we gave in the AWS IoT console.

The MQTT server is the broker server to which you want you devices to connect to. The clientID should be unique string fro each devices that connects to AWS IoT account. we have two update topics to publish to:

The topics are explained in detail above.

URL for the broker to connect to

The url for the mqtt broker can be found in the Things registry device entery. Simply click on the device and then in the left pane click Interact to find out the endpoint details.

The subscribe topics are for getting a callback mechanism for the things for its various life-cycle events, like update accepted, update rejected etc. This will help the devices take alternate code paths if the update or get operation failed for some reason.

These three Certificates are the ones that support the TLS communication with the AWS IoT MQTT gateway/broker.

The RAK 473 is powerful enough to support TLS communication with AWS IoT which makes it a lucrative board for secure operations.

This function is responsible for updating the state of the LED. In our implementation, this function takes a int desired state (1 or 0) Since this is normal Arduino API style, passing 1 would turn on the LED and passing 0 would turn off the led.

Here is the integration details. This function is called from 'update/accepted' section of the callback function (explained below). So when our Shadow update services is called either via MQTT endpoint of HTTP endpoint, our devices would get the '/update/accepted' MQTT topic relay and it will then set the led to the same state that is mentioned in the Shadow response present in the MQTT payload.

Excercise: try to edit the above function to set the led state directly as well to the GPIO pin.

This function checks the state of the LED. It does this by sending a request to the '/update/get' mqtt endpoint. The response will be available in the get/accpeted mqtt topic.

The callback function has three variables that are of importance.

This function is a very basic reconnect mechanism if the MQT library returns the state of the client as disconnected. In such case the function will re-trigger a MQTT broker connection and subscribe back to the topics of desire.

After doing the basic GPIO mapping and setting the inital state of the led. We come across the above code section. If the wifi status is disconnected, we try to the connect the wifi client ot he SSID we provided with the required password.

Here is the TLS magic. Such a complex thing to achieve, but so elegant in AMeba SDK :). Here we set the ROOT CA for our TLS connection to the AWS IoT mQTT endpoint. And we also set the private key and client key pair for the communication encryption.

It is important to specify the AWS root CA as well because AWS IoT allows developers to use their own ROOT CA if they don't feel the AWS Root CA is sufficient for their requirement. In such scenario you have to provide the certificate details of your Root CA the associated variable explained above.

These two lines let the MQTT client object to connect to our AWS IoT cloud broker and set the callback function explained above.

It is important to understand that we are connecting to the mqtt broker with a QOS request of 1. Which means deliver 'atleast once'. This could mean that the message delivery may happen atleast once (or multiple times) This QOS is a fine balance between speed of delivery and making sure that message is delivered concretely to the end device.

More explanation about QOS 1 is provided in detail here:

Note: Amazon IoT doesntr suppoort QOS of 2. This is because the MQTT broker doesn't send the PUBACK or SUBACK words back to the receiver for message acknowledgement.

The loop function is pretty self explanatory. We just need to reconnect if we get disconnected from the MQTT broker.

Now push this firmware to the devices and see the led state change when you update the LED state from a MQTT topic or from a web/mobile application.

For making a sample mqtt request, you can use the AWS IoT console MQTT client.

You will be greated with a page that shows you have a mqtt agent connected and available for subscribing or publishing to the the topic:

Replace the <THING_NAME> with the name of your thing. Send this JSON to the service:

This allows you to set the state of the led to 1. you should see that your device gets the message in the update/accepted callback endpoint and the led state should change.