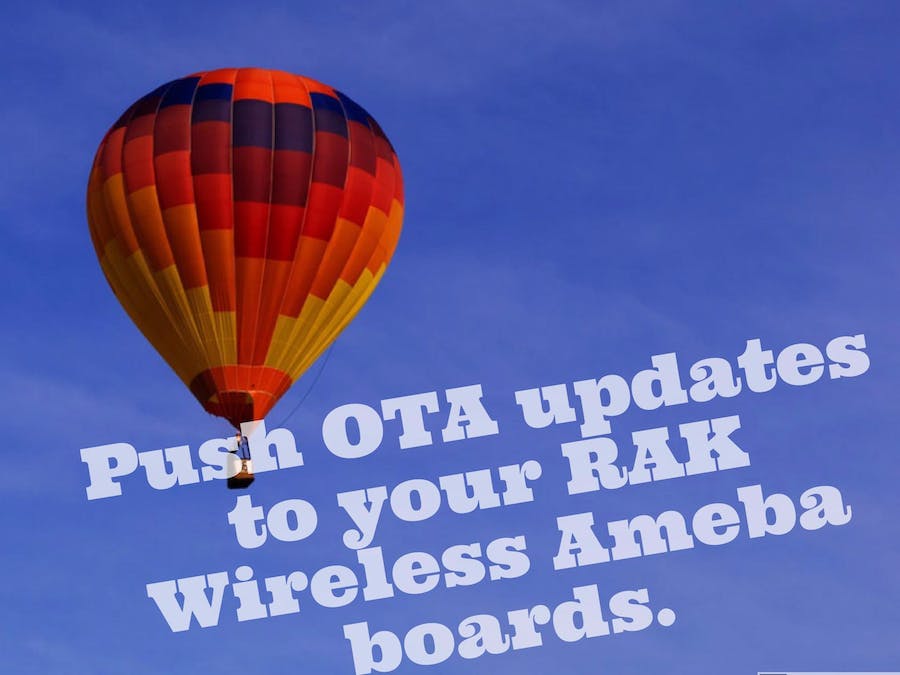 The Ameba IoT SDK is an awesome piece of core components and APIs to access the features of the Realtek based IoT wifi chipsets like the 8710, 8711 and 8195. The Ameba board are cost effective and the best bang for buck processor out there for wifi IoT projects joining the band wagon with their competitors like Espressif and Nordic.

RAK Wireless has a plethora of board based on these chipsets that cater to various needs of a developer. The RAK 473 and Creator Pro boards are based out of the 8711 mode while the Creator board is based on the 8710 module. The whole family of boards is programmable using the Ameba Arduino IDE and has the same Arduino style APIs that we have come to love

For steps on how to setup you ameba SDK arduino IDE follow the steps in the hackster.io article here: https://www.hackster.io/naresh-krish/diy-remote-wifi-switch-using-the-rak-dashbutton-09b0de

For delving deeper into the AMeba arduino SDK and the Ameba SDK core visit:

We will consider the RAK creator pro board for our example here. But the steps are the same for a bare bones RAK 473 or a dash button hardware as well. After setting up your IDE continue to the next step.

Once you have installed the Mbed drivers for the RAK creator pro. Connect the Creator pro board to your pc via USB. A MBED drive will be visible with a HTML file and few other files in it. Close this drive and open up the Ameba Arduino SDK.

Add the code below:

The code is well commented and explains what each function of the OTA.h API does

Click upload in the arduino IDE after selecting the correct board (RTL8711) and the port on the IDE. The program above assumes the the first version of the firmware flash via the USB method (also know as DAP).

The DashUploader project is a completely open source implementation of the OTA firmware delivery method for any Ameba IoT board. I maintain the source code over at Github. The project will manifest as an android app and as a cloud service in the future to push updates to several devices. For now the project provides a windows and linux app for pushing new firmware to your Ameba IoT device via a native app.

A short explanation of the OTA method (courtesy; amebaiot.com):

OTA (Over-The-Air) refers to the online upgrade mechanism via Internet. Arduino IDE offers OTA feature, which follows the workflow in the figure below:

Then Arduino IDE sends the OTA image to Ameba through TCP, Ameba saves the image to specific address and sets boot option to boot from this image next time. The workflow consists of three parts: mDNS, TCP and OTA image process. Details related to mDNS is described in the mDNS tutorial. TCP socket programming is used in transferring image, and is already provided in the OTA API. In the next section, we will discuss on how to process the OTA image, and introduce some basic knowledge on Ameba flash memory layout and boot flow.

Below figure shows the boot flow:

We discuss the following scenarios:

The rak 473 board has a number of digital pins that can be used as the reset pin for our code:

The digital pins by GPIOA, B and C ports are all available for the reset pin. Configure the pin correctly in the arduino sketch above for the factory reset feature to work better.

The DashUploader app was developed ground up with ease of use rather than complicated collection of menu and convoluted workflows. The apps sole purpose is to assist you to update your Ameba board in three easy steps:

Once your board is flashed, press the reset button (although this step is unnecessary as the board will auto reset). This app currently works with the OTA.h APIs and hasn't been tested with other implementations.

A recent addition to the Ameba library is the ability to do a cloud based (HTTP) OTA procedure.

This project needs a web server software running on your system or on the cloud. Some of the famous ones being:

Once you have installed the web server just host your file in a directory structure in your web server. Note down the URL that will put against the file and keep it handy.

We generate OTA firmware to verify if the download from Web Server is complete.Open Arduino IDE and add a sketch file as below and print "Hello From Ameba!!" on the console every 1 second in the loop() function .

Copy ota.bin and put it to web Server htdocs (or the web server root) directory

Before remote OTA, we check ota.bin correctness via checksum. We can use the checksum tool provided by RTL8195 Github:

Open cmd and change to directory where you have the ota.bin file. Key in:

203df9 is the checking code generated from checksum. Add a check.txt in the web server root (same place as the ota.bin file)

The libraries we need are:

Install the library in your sketches folder.