Learn how to send messages to and from Amazon Web Services using the PIC-IoT and AVR-IoT development boards from Microchip.

Learn how to send messages to and from Amazon Web Services using the PIC-IoT and AVR-IoT development boards from Microchip.

What if you could prototype your IoT hardware device and build your cloud application at the same time? Good news. My team and I spent months stumbling through an embedded-to-cloud journey. We fell into time traps and discovered pitfalls so that you don't need to! We believe we have finally curated an ideal way to get you started developing your own applications.

In this project, you will get hands-on experience programming an embedded device (an AVR-IoT or PIC-IoT board) and building a cloud application using AWS and the MQTT pub/sub messaging protocol.

You can follow along using one or multiple dev boards. If you use two or more you will get a special treat – the cloud application will blink the LEDs on each connected dev board when a button is pressed on any of them. Maybe you can give one to a friend and use the blinking LEDs as a secret messaging system?

Illustration of the data flow in this project

If you are unfamiliar with the MPLAB X integrated developer environment (IDE), you can check out the following guide: Get Started with MPLAB® X IDE and Microchip Tools

Step 1: Provision your IoT board

If you haven't yet migrated from the sandbox to a private AWS account, you will need to do that using Microchip's IoT provisioning tool. If you're not sure, you probably haven't - so check out this tutorial to set up your board-to-cloud connection.

In the aforementioned tutorial, the IoT boards are provisioned using the IoT Provisioning Tool. This generates an AWS IoT Core Policy that determines which permissions the boards have when they interact with AWS resources. By default, this policy is configured to only grant an IoT board the right to publish and subscribe to MQTT topics containing the board's thing name.

In this project, we will send and receive MQTT messages over the buttonPresses topic. We must, therefore, expand the permissions to also include this topic:

The permissions have now been updated, and the board should be able to send and receive data over the buttonPresses MQTT topic.

The starting point for our application is an unmodified copy of the firmware that is compatible with your device's microcontroller family:

Download the correct repository and open the PICIoT.X and/or AVRIoT.X project(s) in MPLAB X.

We will make several modifications to the firmware in the next couple of steps. If you get stuck, you can check out these fully modified versions of the firmware on GitHub:

Step 3: Sending messages to the cloud

We want to send a message to AWS whenever the SW0 button is pressed, which we will detect using interrupts.

In the MPLAB X project, open application_manager.c (Source Files -> MCC Generated Files) and add the following code just after the SYSTEM_Initialize() call in the application_init function:

The first line enables falling edge interrupt detection for the SW0 button on the AVR-IoT boards, and a function handler for this interrupt is then assigned on the second line.

In pin_manager.c, perform the following edits:

In application_manager.c, set the SW0 interrupt handler just after the call to the SYSTEM_Initialize() in the application_init function:

The above procedures ensure that the sendButtonPressToCloud function will be called whenever the SW0 button on the PIC-IoT or AVR-IoT board is pressed.

The IoT boards communicate with AWS using the MQTT protocol, which uses a publish-subscribe model. Messages are not sent directly between devices but are rather published to specific topics. Devices can subscribe to various topics and AWS keeps track of how the messages should be distributed.

Let us declare a variable to keep track of the MQTT topic we will use. Add the following declaration to application_manager.c (e.g., below the declaration of the mqttSubscribeTopic variable):

Implement the aforementioned function handler by adding the following code to application_manager.c:

This function closely resembles the sendToCloud function that we mentioned earlier and will publish an MQTT message to the buttonPresses topic. The content of the message will be a JSON object that contains the name of the thing/device that sent the message.

Build the modified project and program it onto the device using MPLAB X. This is done by clicking on the Make and Program Device Main Project button on the MPLAB X toolbar.

Verify that messages are successfully being sent to AWS

When the device has been successfully programmed, let us make sure that we are receiving the messages in AWS:

Verifying that messages are succesfully received in AWS IoT Core

Step 4: Receiving messages from the cloud

Now that we have successfully modified our project to send messages to a custom topic, we must also find a way to subscribe to this topic:

The second parameter of the CLOUD_registerSubscription function is a handler that dictates which function will be run when a message is received to the specified topic. We, therefore, need to implement the receiveButtonPressFromCloud function to handle any received messages.

If you are using both AVR-IoT and PIC-IoT devices: To use devices from two different device families together, it is necessary to complete this tutorial individually for the AVR-IoT and PIC-IoT repositories on GitHub and program the devices with the compatible firmware.

Success! Both boards are blinking when the SW0 button is pressed!

Where to go next?

For more tutorials on how to use the IoT boards with AWS, check out the Microchip IoT Developer Guides for AWS on GitHub. 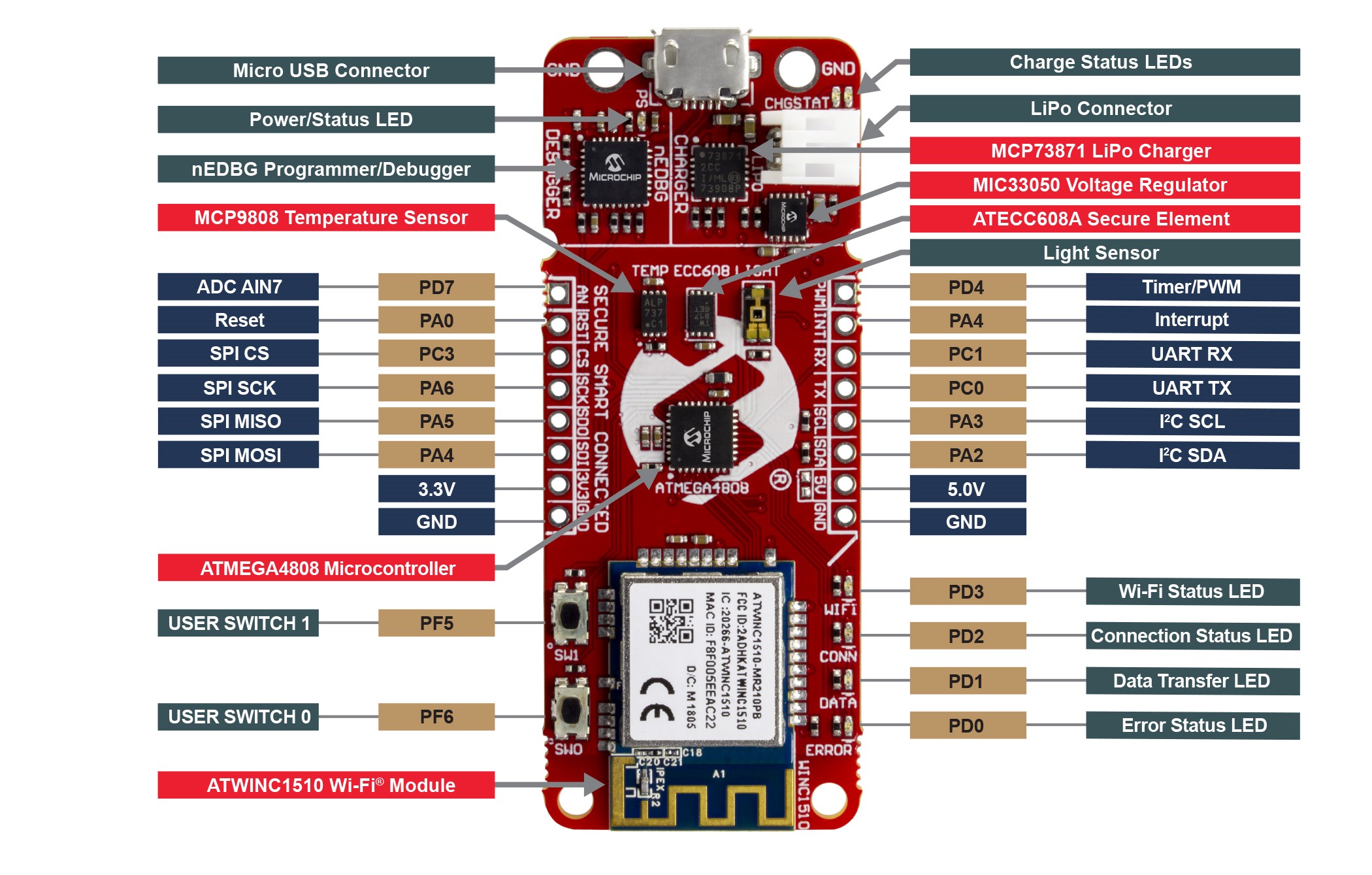 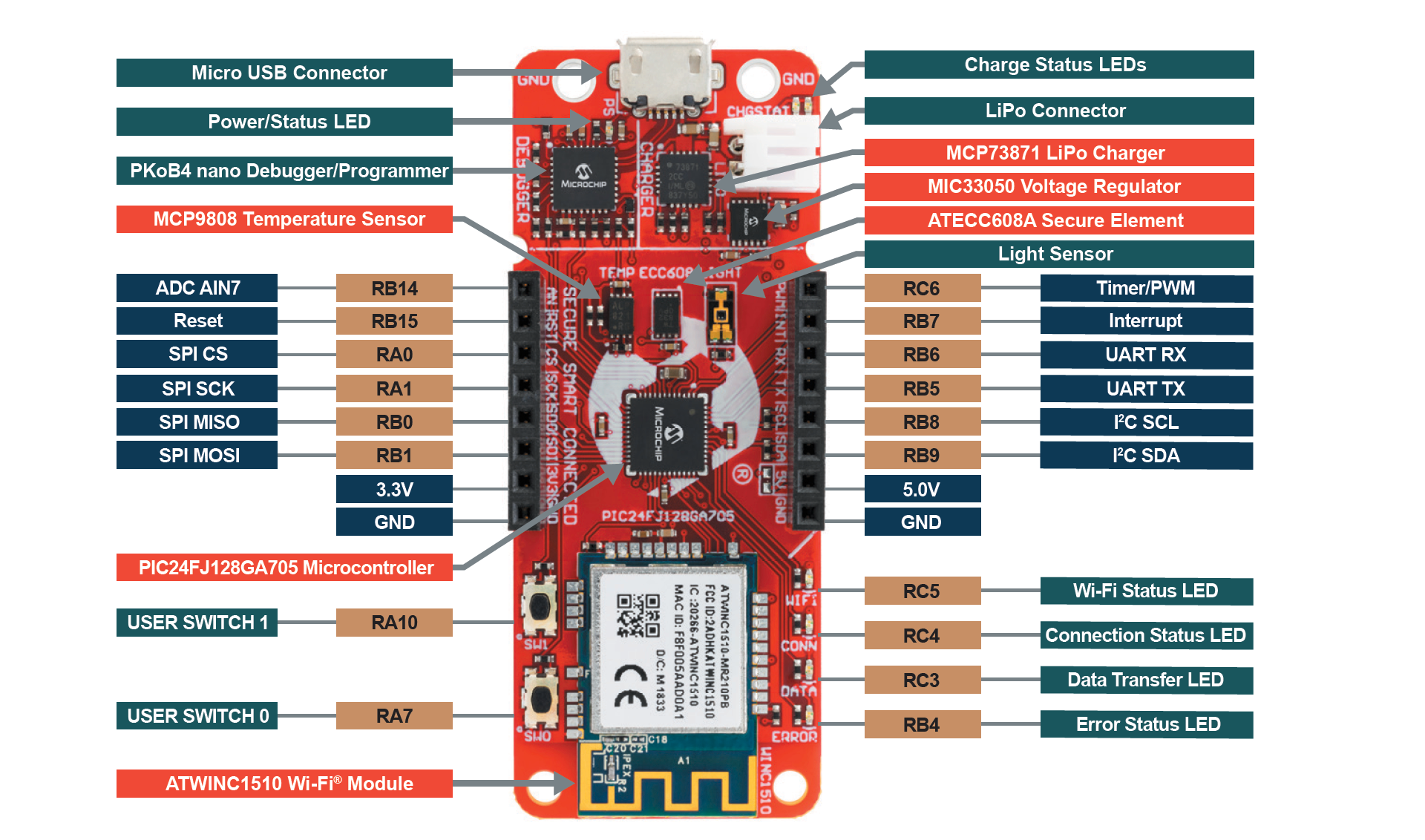