The air in your bedroom are important for a comfortable sleep. A fan is attached to the window of the bedroom and automatically controlled.

The air in your bedroom are important for a comfortable sleep. A fan is attached to the window of the bedroom and automatically controlled. 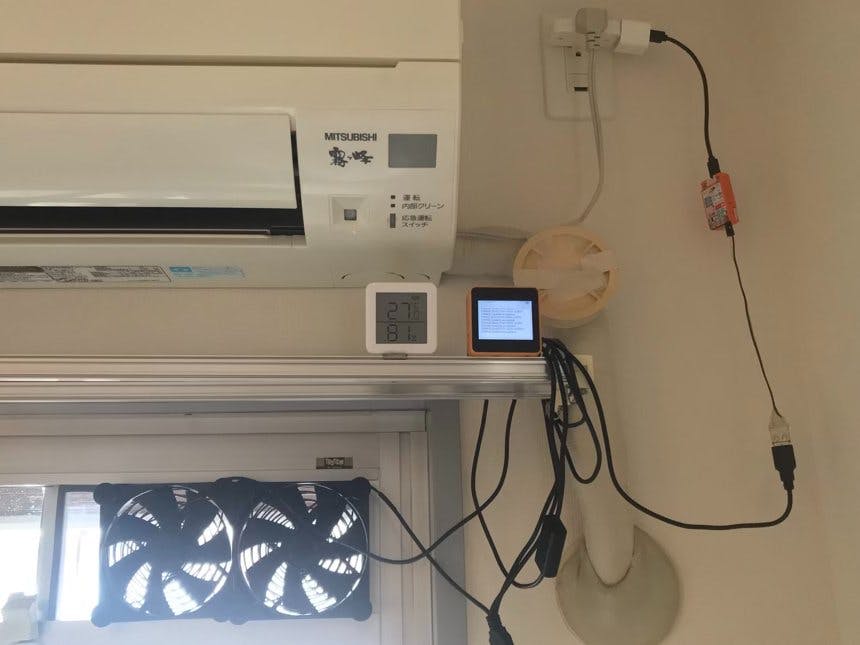 The temperature and humidity of the air in your bedroom are important for a comfortable sleep. Generally, we turn on the air conditioner to adjust the temperature, but it can be difficult to adjust the temperature at bedtime, as it can be cold when the air conditioner is on, or too hot and stuffy to sleep without it. In Tokyo, where I live, it is not that hot at night except for a few days in the middle of summer when it is very hot, and sometimes it is just fine to open the windows and let the cool air in. However, even with the windows open, it can be too cold in the morning, making it difficult to adjust the air quality in the bedroom. Just to note, in most parts of Japan, it is safe to sleep with the windows open. It's so safe that there was a big fuss over a small monkey the other day.

We will create an IoT system that automatically turns on and off the fan in the room based on the data from the thermometer.

Since many elements work together, we will explain each element in turn.

The source code is here.

It is based on the Core2 tutorial and sample code from the esp-aws-iot library, so please refer to the original for detailed configuration and build settings.

This is a thermo-hygrometer that flies data via BLE. The protocol has been analyzed, so you can use ESP32 to get the data.

I think it is the best temperature and humidity sensor because it is small, can be placed anywhere, and runs on AA batteries for over a year.

In this case, I'm going to put it near my pillow in my bedroom. The temperature in the room is different between the top and bottom, and also between the window and the bedside. It takes some trial and error to figure out where to measure the temperature. At the very least, I don't think you can really make a comfortable adjustment if the thermometer is fixed next to the control system.

Temperature and humidity data acquired from the SwitchBot Meter via BLE is sent to the AWS IoT Core. It sends the data only when there is a change in the data.

This is based on the code in the thermostat tutorial, with the addition of BLE processing and a command to change the LED color.

I've also fixed a bug in the textarea handling part of the original code. I'll make a pull request later if I remember.

I would like to somehow process the temperature data sent to AWS IoT with an AWS service and send a message to the device controlling the fan telling it to turn on or off.

AWS is very flexible, so if I sent the data to IoT Core for now, I could do a lot of trial and error later on to figure out which service to use to process the data and how.

In this case, we first implemented the decision logic using Dynamo+Lambda. After that, we had to switch to the method of republishing messages within IoT Core's Rule.

The first thing I did was to store the data in DynamoDB.

We put the following query in the DynamoDBv2 rules of IoT Core.

The topic(3) extracts the part of the topic that corresponds to thingName.

The destination DynamoDB table is

Next, we will create a Lambda. In this Lambda, we will read a few data from the latest data stored in DynamoDB, and send a command based on the data to determine the fan behavior. The reason for retrieving several data is that we were thinking of using time series changes or averages as the logic to make decisions.

The code is a bit long so please refer to the link.

The fan is turned on when the temperature is above 30 degrees Celsius. I also changed the color of the LED so that you can see how it is working.

If you run this periodically, such as every minute, you should be able to control the fan ON/OFF according to the temperature.

Now that we have the logic to turn the fan on and off on the cloud side, the next step is to create the device that will actually run the fan.

We could have crammed this function into Core2, but since this is an IoT Core project, we decided to implement it as a separate thing and try to work with multiple devices.

The GPIO of the M5StickC cannot output enough current to run a fan. If you want to run the fan, you will need to use a relay unit or something similar.

However, this time we will use a technique to turn on/off a larger current with the M5StickC alone. By manipulating the power supply IC with I2C, we can turn the 5V output on and off.

It converts the output of the 5V pin to a USB connector and turns a fan that takes power from the USB.

See the file m5stickc_5v.cpp at the link for the code.

Note: This technique for controlling 5V will only work with newer versions of the M5StickC. You need something newer than what is called the blue perfect version.

The Core2 project is based on the thermostat tutorial, so it was an ESP-IDF project. it is developed using FreeRTOS tasks, but it seems to be more difficult than Arduino. The M5StickC library and peripheral device libraries are available for Arduino, so it would be nice to be able to use them.

The AWS IoT component (https://github.com/espressif/esp-aws-iot) is for ESP-IDF, so I can't use it with Arduino.

I did some research and found a way to incorporate the Arduino core library into the ESP-IDF project as a component and use the Arduino code and library.

Now you can use IoT Core components while using the usual Arduino libraries.

The code is basically similar to that of the Core2 ESP-IDF project, but I feel better about it because I don't use the FreeRTOS task functions to process each task. There may be some performance issues, but for a hobby project, I think this is a good option.

I created the logic for fan control with DynamoDB and Lambda. However, it is somewhat inefficient to store all messages in DynamoDB and run Lambda periodically. I think I can do better.

I set up a Rule to store the messages in DynamoDB, and in the action of this Rule, there was an action called Republish. It can receive messages, process them, and publish the processed messages.

The JSON output from this will look like this.

Now we can update the shadow of this thing.

This command will allow you to update the shadow. This is useful to verify that a part of the system is working correctly.

You can use the test tool in the AWS console that allows you to subscribe to and publish MQTT to view and send messages for debugging.

You can also look at the Device Shadow documentation in the IoT Core thing. If something doesn't work properly, use these to check one by one.

The ventilation system is connected to the Internet. You may want to control it with your smartphone.

First, let's create a website with a login function using this tutorial as a guide. I used Cognoto, but I think other logins will work as well.

Next, configure your site as described in this PubSub article.

This is all you need to create a web application to communicate with AWS IoT MQTT.

The completed code can be found at the link. Amplify-App.js

We have created an IoT system for automatic ventilation by combining a device with ESP32 from M5Stack and AWS services.

ESP32 can also use HTTP, so it can connect to ordinary WebAPI. Until now, I have also used HTTP. However, by using MQTT-based AWS IoT this time, and combining AWS services, I was surprised at how convenient the world of IoT development has become, including even the cloud side.

For now, I found out that IoT devices can be implemented simply by using device shadow and connecting them to AWS, which makes it very easy to implement subsequent development in conjunction with the cloud.

By using Amplify, we were able to create a system that connects IoT devices to smartphones and the web very easily. 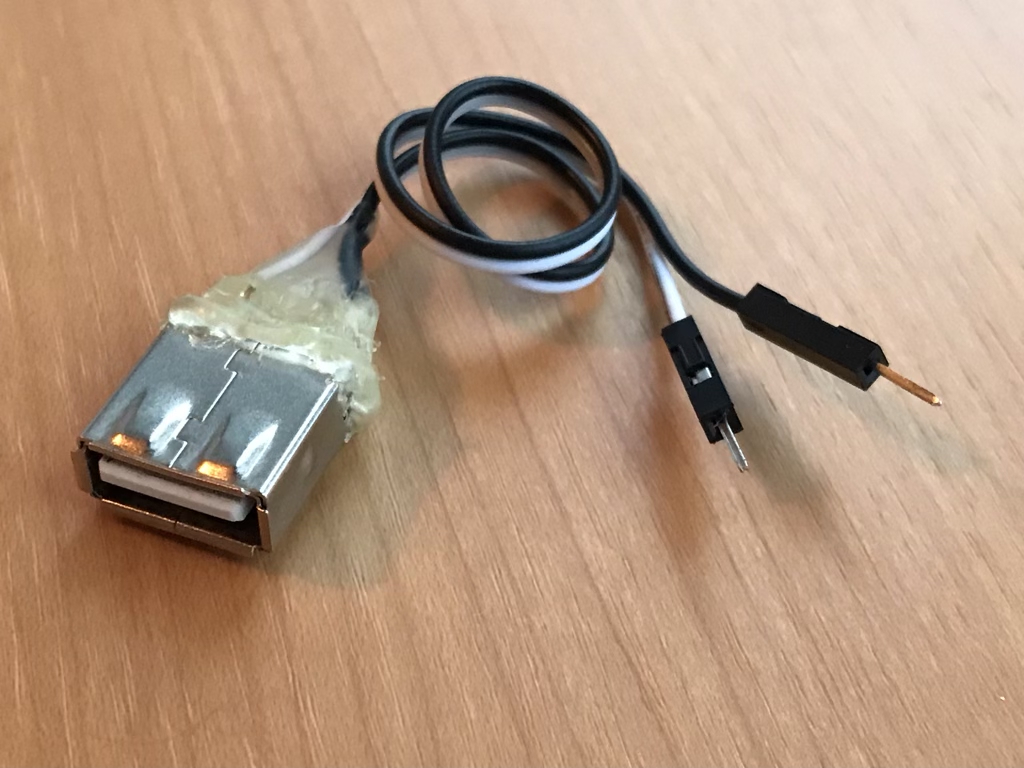