Want to learn how to play the piano? A chatbot using Alexa can assist you with the repetition needed for beginners.

Want to learn how to play the piano? A chatbot using Alexa can assist you with the repetition needed for beginners. 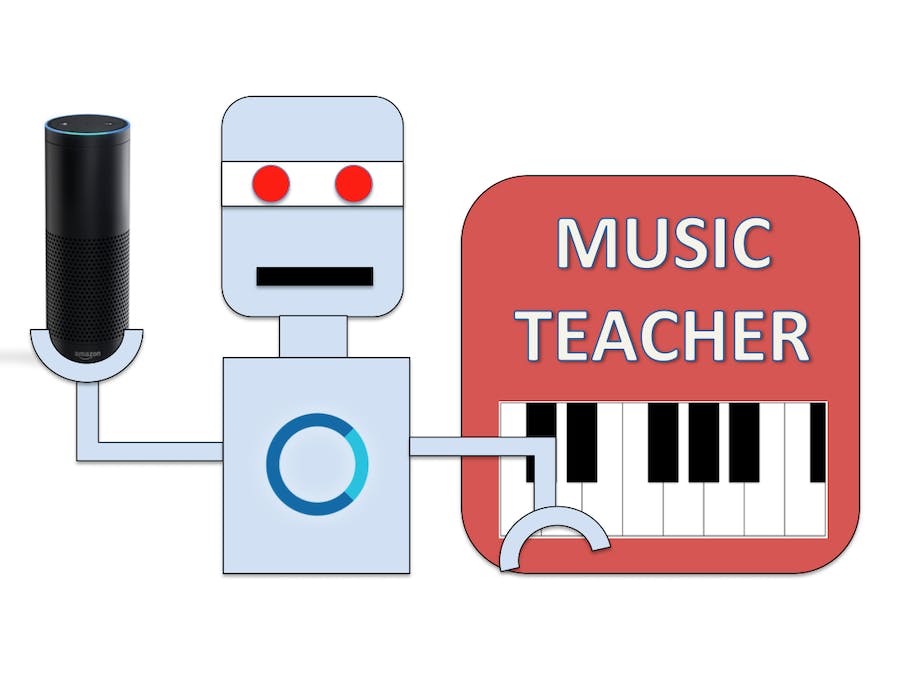 Piano music has been around for centuries and is as enduring as any form of communication or expression. Different cultures around the world play the piano, and there are beginners in every generation. Like most abilities, becoming "good" takes time and plenty of practice. How can we enable technology to make this task easier?

I learned piano when I was younger, and no matter how good your instructor is, advancing from the beginning levels is all about repetition. It can be frustrating, and time consuming. My parents would drive me for lessons once or twice a week, and then I would need to practice at home in-between. Now that had some limitations.

That was a long time ago, so when thinking of the same challenge with the next generation, I think we can improve on this with some of the new voice technologies like Alexa.

Now there are limits to what a chatbot can do, and I would advocate once you get beyond the basics, there's nothing like having a professional coach that can help you along as the music gets more complex.

If you would like to try out the skill, it's in the Alexa Skill Store, and it's called "Music Teacher". Here's a demo with my next generation.

Voice chatbots can go beyond the spoken word, with devices such as the Alexa, we can incorporate a digital version of the piano itself. To do this, you need to first learn in depth how to manipulate the outputSpeech attribute in the skill's response. Normally the type is "PlainText", but by changing it to "SSML" we can invoke a broader range of actions. Here's what it should look like.

Now if we want to just mirror the "PlainText" format, it just ends up looking like this.

If we want to get a little more creative, and mix in a "pause" we can do this.

The limitation is that we can pause for up to ten seconds, but begins to show how we can manipulate the output for gaps where the user might need to do something. To integrate audio into the spoken text, it's a similar markup - syntax below.

Amazon has a great write-up on their use of SSML here.

So when building this chatbot, we are going to create a script that mixes together both the spoken word with MP3 files that will be recorded from a piano, providing pauses for when the user should be playing notes on the piano.

There are some other limitations/restrictions within Alexa that should be understood. First, the overall length of an output response can't exceed 8000 characters. That won't be a limitation for this skill as that length would be in the range of 7-8 minutes of the spoken word, and we don't have nearly that amount of information to provide. The limitation that is constraining for this skill is that you can only include five audio references (more on how that plays out in step 3).

Step 2 - Creating Media from a Piano

The chatbot is going to need content to pull from a source available via the public internet (via HTTPS), so we need to build a library of musical notes and songs. On the Alexa platform, it can play back MP3 files that are marked appropriately in SSML, and there's a benefit to hosting within AWS S3 as it's a trusted SSL source for the HTTPS calls (thus no need for special certs). There are also a few other pieces that need to be considered when leveraging Alexa.

So when authoring the MP3 content, we need to be very careful to use the right encoding settings, and the software that I used is an open source product called Audacity. Here's a basic view of how this works.

When recording a song on the piano, we will break it into four to five segments. That will enable us to mix together the voice and piano note playing that we will get into with the next section. It also is in the range of ten seconds, so far below the limitation of 90 imposed by Alexa.

The architecture view above also calls out some graphics that will be displayed as cards on the Alexa app to assist the audio experience. Here's an example of the card that comes up for the note drill section. These aren't required, but do augment the experience in case the student wants to view.

Screenshot of Cards displayed during skill execution on a iPhone7

These can be done through any graphics software and will also be hosted in S3. To include an image, switch to the "Standard" card output type, and include the direct path for the images. The pixel dimensions for the small card needs to be 720x480, and the large 1200x800.

Please note: for Alexa to be able to access either the MP3 or PNG/JPG files, you'll also need to make them public content in S3, where the URL is available for unauthenticated users to download to their device.

We are going to build a curriculum for a beginner, and the assumption is that there is a set of fundamentals that can be taught. Here are the goals of what is considered basic.

Here is the outline of what the initial skill looks like.

Learning the songs is a much longer session, and needs to account for the limitation that we can only include five audio clips into a single output response back to Alexa. Here is an outline of how the output gets built.

Voice flow for teaching a song

Each loop plays a MP3 file in the third step, so it can only be done a maximum of five times. So if to play a song with 40 notes, each section will need to group eight notes. Given memory retention of the notes by the student, it will restrict what songs can be chosen. For example, "Twinkle Twinkle Little Star" has 35 notes, so the song gets broken into five pieces, requiring the student to memorize seven notes for each section. The song "Joy to the World" has 57 notes, so the memorization ends up being a little more, thus driving up the complexity of comprehension for the student.

Once the student can learn these different sections, there is a "duet mode" where the Alexa skill plays just the music, with the expectation that the student can play the notes at the same time. This assumes a certain mastery of the song, and helps tune the note recognition, as well as tempo of keeping up with the notes.

Now that we have the design, we can get to coding!

These instructions assume basic familiarity with how to build an Alexa Skill, and if you're not familiar with this part, please look here.

Some of the key logic is around how to build out the song that is played. Here is the section of the skill that contains the code the builds the song based on the content.

Once the assembly is written, then we just need to model the individual songs. It's a JSON object, and here are the variables that are passed in for "Twinkle Twinkle Little Star".

This allows creating of other content, expanding the capabilities of the skill by just decomposing the music, and making more MP3 recordings.

There's no substitute for allocating time to practice, but going back to the problem statement - here's an assessment on how valuable this would be.

Go ahead and give it a try - it's called "Music Teacher".

13 projects • 35 followers
Life-long learner who started off with an Electrical Engineering degree, but have been in software and systems engineering my whole career.
ContactContact