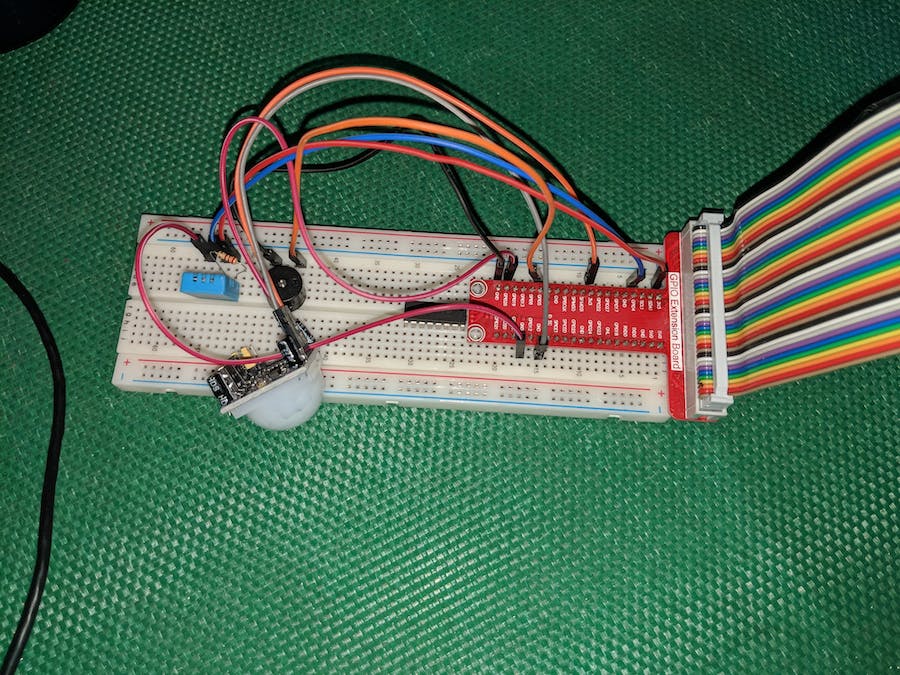 What is your project about?

The project is called HomeSecure. An anti-theft system used to prevent or deter unauthorized appropriation of items considered valuable. It captures an image whenever the PIR sensor detects a motion and sends it to telegram. It also tracks the current temperature of the surrounding area. There is also a website where the users can view the temperature history and the Images captured. Users can control the buzzer using the website as well as edit telegram commands under settings. The telegram can control the buzzer, get current temperature and humidity and capture images using the piCam. This can be done through commands that users have set on the website.

Why did we decide to make it?

We create HomeSecure as we believe that, while today's burglary statistics show an overall decrease in burglary rates, thousands of homes (roughly 325, 000) are still being broken into every year - often in plain view, during the day. In fact, property crimes in 201﻿﻿5 resulted in losses estimated at $14.3 billion.

We believe that our project can at least deter crimes related to burglary as we have created a system that allows home protection specially when the there is no one at home.

How does it work?

The website is hosted on EC2 and it communicates with the Raspberry Pi through MQTT services provided by Amazon Web Services. The telegram function is also hosted together with the website using the same services.

How to set it up?

This is how the final project should look like:

In this Step, you will learn how to create and register your Raspberry Pi as a “Thing” with AWS IoT.

In this step, you will write a simple Python program thatreads the values from your DHT11 and send it to AWS

Create a file named “aws_pubsub.py” with the following code

Run your program to verify that you canconnect to AWS and publish and receive sensor messages using the MQTT protocolas shown in the instructions below.

S3 provides a simple web services interfacethat you can use to store and retrieve any amount of data, at any time, fromanywhere on the web. To store data on S3, you will need tocreate an S3 Bucket in a specified AWS region. An S3 bucket serves as a container for you to organise the objects youwant to store in the cloud and has a standard URL for accessing the objects.

In this section, you will make use of theAccess Key Id and Secret Access Key to run the “aws configure” command so thatyou can successfully use the AWS boto3 Python SDK library to write Pythonprograms that can interact with AWS services like S3, DynamoDB and Rekognitionsuccessfully.

Create the following file with the Python code below which uses thePicam to take a photo, and then uploads it to Amazon S3. Replace bucket_name with the name of your own S3 bucket. In this instance, we names it boto.py

In this step, we will be setting up Amazon RDS

Specify a name for the database. In this instance, we named it “homesecure-iot”. Create a master username and password. Make sure to remember it as it will be used in the future. Then click on next.

Once in the page, take note of the endpoint and port. Copy it to a notepad.

There is a more detailed document listed below. It contains step by step guide on how to set up the entire project.

The codes needed for the project are also listed below.